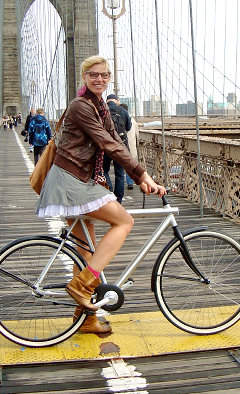 Biker pulled over by NYPD for sexy outfit: 'I thought he was joking'

Cycling while sexy could be hazardous to city motorists - just ask Jasmijn Rijcken.

The leggy Dutch tourist said she was pulled over by an NYPD cop for flashing too much skin while on two wheels.

"He said it's very disturbing and it's distracting the cars and it's dangerous," Rijcken told the Daily News. "I thought he was joking around but he got angry and asked me for ID."

Rijcken, 31, was not given a ticket during the May 3 incident and did not get the officer's name, but was left feeling baffled.

"I didn't even think for one second that my outfit could be harmful or disturbing," she said.

As general manager of a Dutch bicycle company, Rijcken was in New York to attend the New Amsterdam Bike Show and hopped on her wheels that sunny day to experience biking in New York City first hand.

She says she got more than she bargained for. "I was on my way back to the hotel when it happened and I changed into pants," she said. "I didn't want to get into trouble again."

NYPD Deputy Commissioner Paul Browne said: "Whether this story bears even a modest semblance of what actually occurred is impossible to establish without being provided the purported officer's name and getting his side of the story."